On March 28, 2016, City Council accepted the Advisory Team's final report with a unanimous vote. We now look forward to temporary installations activating the site this summer!

WHAT DO YOU WANT TO DO HERE?

On March 8, 2016, Asheville City Council approved a “visioning” process — not a “design” process — for the long-vacant and controversial .75 acre City-owned site at 68-76 Haywood Street and 33-39 Page Avenue in downtown Asheville. Public rights-of-way (approximately 1.6 acres) adjacent to the site were included in the study area for the visioning process. This total 2.35 acres is surrounded and complemented by existing facilities and attractions that appeal to residents and visitors alike.

Advisory Team Members, and their Constituencies

City Council’s 2016 action charged a group of 18 volunteers (15 Council-approved constituencies that selected their own representative, plus three at-large members named by Council) to conduct the “visioning” process as facilitated by the nonprofit Asheville Design Center. This group is called the Advisory Team. (The Buncombe County representative had to withdraw from the process due to time constraints.)

The ADC began collecting public input re: the Haywood & Page properties in May, 2016, at the Project for Public Spaces presentation. Rather than providing participants with an either/or choice, or multiple choice, the volunteer team elected to ask respondents the open-ended question: What would you like to do here? This would allow for a better understanding of how the public wanted to use space, which in turn would inform the composition of the space. The open-ended question also allowed respondents to showcase their creativity, injecting many novel concepts into the mix of ideas. This approach was labor-intensive, but prompted participants to think about the experiences they desired in the space and allowed for authentic feedback.

The Asheville Design Center and Haywood Street Advisory Team gathered input that ultimately informed a recommendation to Asheville City Council. The Advisory Team presented their vision to City Council on March 28th and it was unanimously accepted. The following table summarizes the active and passive uses deemed appropriate by the Advisory Team for the long-term use of the site. These uses will be incorporated by a future design team in developing final designs for the site. 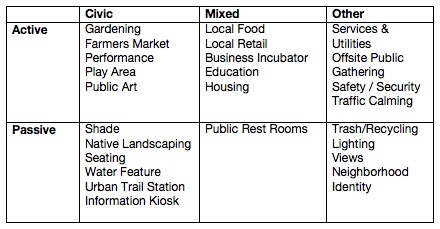 A selection from the Advisory Team’s final report…

Impressions of the fully developed, worked out space. What we would like anyone to experience when arriving at the site.

We feel inspired. There’s good energy here, mainly because everything we’re looking at says Asheville in the most authentic ways. We sense a brilliantly worked out civic space in which we can slow down, breathe and relax, bring guests and friends or simply wander if we want to be alone, in a safe, vibrant and soulful spot. We feel the mountains here, as if they’ve come down to greet us. There’s a sacred quality too ~ because of the enduring presence of the Basilica and because the color, design and juxtaposition of things reflect the history and character of the city. Whenever we walk into this space, changeable and fluid with the seasons, it’s like a curtain rising on one of the city’s most consequential and beautiful urban spaces. We sense community here, a community of many voices and faces, and we’re glad to be a part of it.”

The future site of Guastavino Place

With the Basilica to the north, 0.77 acres of City-owned land will one day incorporate a vibrant civic space. Photo courtesy of Ken Abbott.

The Basilica of St. Lawrence

Judging from the attire, Ashevillians have wanted a plaza in this space since the 1970s.