About the Asheville Design Center

Need to get in touch?

MountainTrue is committed to keeping our mountain region a beautiful place to live, work and play. Our members protect our forests, clean up our rivers, plan vibrant and livable communities, and advocate for a sound and sustainable future for all residents of WNC.

ADC is an independent, nonprofit agency founded in 2006 on the belief that everyone deserves good design. Planning builds community, and design shapes our lives every day—yet few of us have easy access to an architect, engineer, landscape architect or planner. ADC recruits volunteer professionals to work with communities to develop design solutions that enhance our quality of life. 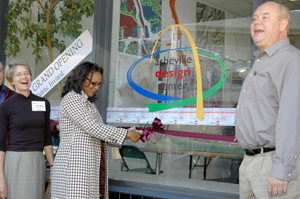 AIA Asheville section applied for an American Institute of Architects “Blueprint for America – AIA 150” project grant. In June 2006, we were awarded $15,000 from AIA for our “Bridging the French Broad: Creating Connected Livable Communities” project. The goal of this project was to engage the community in discussions as to how the Blueprint’s “Ten Principles for Livable Communities” and the community’s design goals could be implemented in the design of the I-26 connector through Asheville.

We have been studying the four NCDoT proposed alternative designs since they were made available in October 2006. We have reached reached consensus on a modification to one of these alternatives. At the same time, this could create exciting opportunities for sustainable growth and increased “livability” along the riverfront and neighborhoods near downtown Asheville; it also creates the possibility for a new signature bridge over the French Broad River.

Since ADC was created with the I-26 project and AIA funding, we have been incorporated as an independent 501c3 non-profit organization and have pursued a variety of new projects with the support of a variety of community sources. As ADC grows, we continue to provide design expertise and a venue where people can come together to promote livable communities in Asheville and throughout WNC.

Design on a Human Scale

Restoring, revitalizing, and infilling urban centers takes advantage of existing streets, services and buildings and avoids the need for new infrastructure. This helps to curb sprawl and promote stability for city neighborhoods.

A "sense of place" gives neighborhoods a unique character, enhances the walking environment, and creates pride in the community.

Design excellence is the foundation of successful and healthy communities.

About the Blueprint for America’s 10 Principles of Livable Communities:

The Blueprint for America is a nationwide initiative through which AIA architects engage with fellow citizens, mayors, other professionals, and local government officials to collaborate on a community service program that addresses a community’s distinct need. In 2006, state and local AIA components will propose, convene, and participate in initiatives that utilize community engagement, in a collaborative process, and quality design as keys to improving a community’s livability. These initiatives were developed in 2007, AIA’s anniversary year. In 2008, the AIA national component will compile initiatives and release the national Blueprint for America. Blueprint initiatives are a gift to the community from the members of AIA, and the members’ participation in the initiative is provided at no fee.

For more information on the 10 Principles of Livable Communities visit: http://www.aia.org/liv_principles

For more information on the Blueprint for America visit: http://www.aia150.org/bl150_default.php